On Monday 25th July, I had the privilege of attending a study day with other Diocesan Children’s Work Advisors, led by Professor Joyce Mercer of Yale Divinity School, on welcoming children, and the theology of play.

My notes are below. I hope they’re helpful. 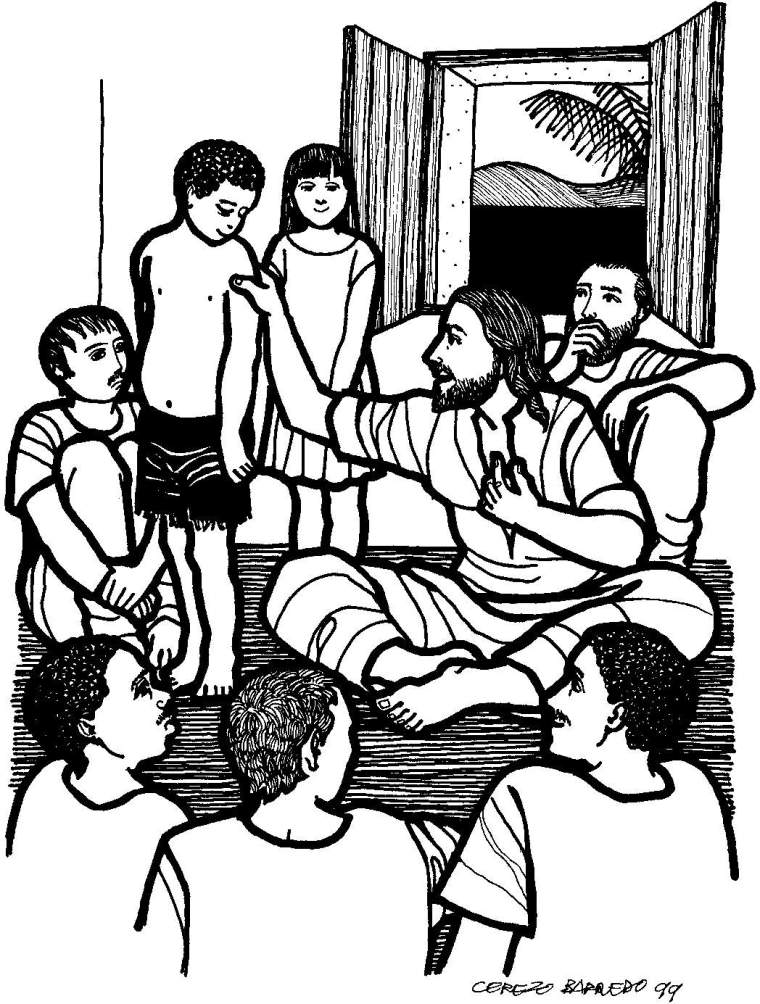 The ways in which we welcome children in church and in other places – are they the same?

What are the frameworks in which we engage with children?

Much of current educational practice – focused on economic outcomes. Is this also the way we see children in church? Not as whole and complete people in their own right, but only as potential?

What strikes you about this passage? What word or phrase?

The Greek word used for “gathered” has maternal connotations, and therefore feminine ones. Jesus’s actions there affirm the importance and centrality of nurture, which was, and still largely is, considered “women’s work.” Jesus is raising up not just the child, but those who nurture the child – usually the women.

The word also has connections to the hospitality of Abraham and Sarah towards the angels. The reader would have understood this.   Jesus uses a child to explain that hospitality, and anchors the child in “the God of Abraham, Isaac, and Jacob.”

Children in Jesus’s time were literally property – they were possessions, and they belonged to their father.  They were the lowest of the low. Jesus was saying – “if you seek God, look among the lowest of the low.” (links to Matthew 25)  This comes right after the disciples had been arguing about status and position!

What are the cultural norms about children in your church culture?

(Some of the responses: support is there, but the focus is on measured, numerical growth, more than nurture. Children are wanted to ease our anxiety about the future of the church, not for their own sake. We feel helpless, and like we’re failing. Children are seen as guests at an adult event, not worshippers in their own right. Children are there to be educated or entertained. Our words don’t match our actions.)

Mark would have been read mostly by village cultures of Jewish Christians in Palestine, not by Gentiles.  The readers would have been dealing with three different levels of colonialism in their daily lives:

Under the Pax Romana system, in which strength is everything, the reign of God coming through a powerless young child and the feminine actions of Jesus, the lowest of the low, was radically counter-cultural. It puts the Kingdom of God essentially in conflict with the existing power structure.

With that in mind, look at the stories in the Gospels that feature women and children. What does this say to us about power?

These are not cute stories about having Children’s Sunday. They’re about overthrowing power structures, via the last, the least, and the littlest.

(Margaret’s own note: every canticle sung by a pregnant woman in the Bible reflects this revolutionary theme, from Hannah to Mary – “he has cast down the mighty from their thrones …” etc.)

Jesus is providing a counter-narrative to the prevailing cultural model of children’s roles: power comes through serving, family does not equal blood relatives, faithful discipleship means engaging in the struggle of the oppressed, and doing this brings new life both here and in the world to come.

In welcoming children, we are called to empower them and to challenge the power structures that oppress them.

In this new context, how can we tell what “welcoming children in church” looks like?

(some answers: they are related to as if they matter, their value is not contingent upon their utility, they’re allowed to have Communion, they are leaders as well as recipients, their questions are taken seriously, they’re not talked down to, they’re included and safe and helped. When children were asked this, they said: if there’s a place for us to run and shout if we need to, if there’s food and drink for us and not just for the adults.  What also came out of this discussion is that if everyone else is welcomed – people with disabilities, the homeless, etc – then that’s a sign that children will also be welcomed.)

This is where we took a break for lunch! When we came back, we talked about PLAYING.

Play is part of God’s desire for us. It’s part of our vocation – vocation here meaning “living into our true selves.”

Play is elusive to define, but here are some signs that play is happening:

What happens if play is proscribed or virtual?

What happens if there are no big blocks of free time for something to unfold?

What happens to our humanity when we cannot play?

The opposite of play isn’t work, but depression. We have an innate need to enter into imaginative worlds not of our own creation.

So where is the Holy Spirit in this?

What is the Holy Spirit?

So what does it matter? How does this affect our daily lives?

Play is a way of encountering God. And it is a way in which children attend to their calling.  Serious things happen in daily life – play doesn’t mean a lack of seriousness.

Children’s play often involves a triumph of good over evil. It enables them to:

In this understanding, the entire liturgy is play.  We are rehearsing for our real death, acting out what God has done for us in the past and will do again, and being given a suspended, liminal space in which to manage the complex emotions of being human.

When we practice something, we get the opportunity to be good at it.

How do we invite children into that free space of playing and wondering?

The Bible gives us a world to enter and imagine.  It gives us God’s vision of what the world should be. We are invited to play with/in that world.

Education forms and re-forms us into different identities (there are many Biblical models of this!). All learning is about becoming someone – it’s an identity thing.

Christian nurture: Formation of an identity within a community shaped by story and symbol. Stories and symbols make us who we are, they affect how we see and perceive and make sense of the world. This comes about, largely, through guided participation in practice.

How do we do that?