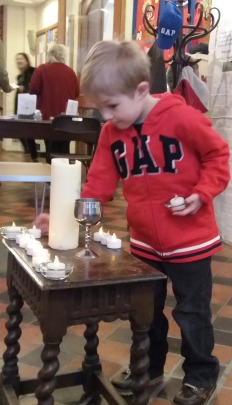 Those of you who have been to any of my workshops or training sessions might have heard me talk about “imaginative spiritual play” and how to facilitate it. Yesterday, Patrick, aged 5, gave me a good example.

His mum was leading one of the Sunday School groups, so he arrived early. As the space was set up, he started playing – first, he arranged the electric candles on the altar.

What I did: got more candles when he asked, helped him come up with an idea on how to arrange them when he was frustrated that there weren’t enough to go all the way around.

Then he asked me if I had any red paper. He balled up the red paper and stuck it in the chalice to be wine.

He also went to the toy corner and got the wave and the rainbow toys and set them on the altar.

What I did: Asked him about his setup, using open-ended questions, e.g., “would you like to tell me about what you’ve made?” rather than “is that rainbow from the Noah story?”

When I asked him about his setup, he explained that the water and the rainbow were, in fact, from the Noah story, and asked me if I’d heard this story.

What I did: Instead of saying, “yes, I know that story,” I asked him to tell it to me.

Using the rainbow and the water wave, he briefly recapped the Noah story, and then asked if we could take out the plastic animals from the cupboard to play with them. As the service was about to start, so we had to go into the main worship area, I said no, but reminded him there was a Noah’s Ark toy in the church’s Pray and Play area if he wanted to go and play with that during the start of the service, before Sunday School began.

What made this work:

One thought on “Imaginative Spiritual Play in action”