Today, my dears, we look at STORYTELLING.

In the standard Anglican Eucharist, there’s a looooong section of pretty talky stuff, from the end of the first hymn through to the end of the prayers.  That’s about 30-45 minutes of very verbal worship, including:

Yes, there’s some music mixed up in there, but overwhelmingly, the expectation is “sit still and listen, and learn orally.”

Anything that can be done to break up this chunk of text is a good thing – not just for children, who, in general, have short attention spans and less social conditioning to hide their boredom, but for adults whose learning styles may vary just as much as children’s do.

Which is not to say that you need to jazz up your service with bouncy castles, a juggling act, interpretive dance, stand-up comedy routines, and a mariachi band, but rather, think about ways in which, while maintaining your church’s tradition, you can perhaps open up the liturgy a bit to some creative new ideas.

The easiest way to do this is by trimming down the Liturgy of the Word – possibly cutting one of the non-Gospel readings – and thinking about how to bring the main story of the day to life in a meaningful way.  Note: THIS IS NOT NECESSARILY THE GOSPEL!

Here are some of the things I’ve done – and some of the mistakes I’ve made. Learn from my failures! 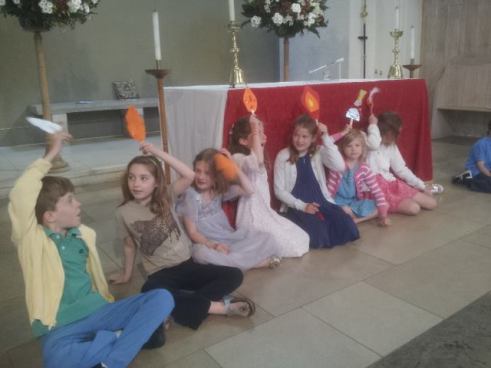 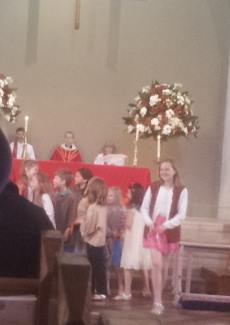 This is the same Pentecost service I featured in Monday’s post. The children had made flames on sticks in the same Sunday School session as making their doves, a week or two before Pentecost, and had also practiced acting out the story.  We had one final practice half an hour before the service started.  The right-hand picture shows them going out into the “streets of Jerusalem” and telling the congregation the good news – I gave them a line to use: “Jesus Christ is risen from the dead and he is Lord!” if they wanted to actually talk to people but didn’t know what to say.

I was the reader for this lesson, which meant I could pause and nudge them if they forgot what to do – and the general atmosphere was welcoming and informal. They weren’t being judged on a standard of performance; that’s not what this is about. This is about enhancing their understanding of the story through inhabiting it, and helping the adults in the congregation see it through fresh eyes. We’ve all done it – heard the first line of the lesson, gone, “oh, I know this story,” and spent the rest of the reading paging through the notices to find out when the garden party is. If there’s something to look at, something happening, adults are forced to actually pay attention to the story !

If you like, you can also act out the story with adults and children together. The Candlemas story is good for this – choose a matriarch and patriarch of the church to be Simeon and Anna, and teenagers to be Mary and Joseph. If you’re able to have a real baby, even better!

You can also do ad hoc performances, with very little rehearsal. The Moses story on Mothering Sunday is particularly good for this one – with a blue length of fabric and some active seven-year-olds to shake it, you have a river, and then you just need a baby doll in a basket, someone to be Moses’s mother and Miriam, someone to be Pharaoh’s daughter, and, if you have extras, you can have a group of Egyptians and tell them to order around a group of Israelites at the start to establish the social order.

Again, this is usually all done by miming – I don’t give the children lines to read (except for the Passion Play on Palm Sunday). I read the text of the lesson – when I’m directing an ad hoc performance, I’ll take a break, and, with a slightly less formal but still reverent tone, turn from the microphone and give instructions (e.g., “all right, now the Egyptians, you can pretend to hit and order around the Israelites – be careful to only pretend.”).  By keeping my tone elevated, I don’t detract from the importance of the story, or break the mood.

LEARN FROM MY FAILURE: If the story you’re acting out is the Gospel, you’ll need to have the congregation sit for it, against all their instincts, or else they won’t be able to see. 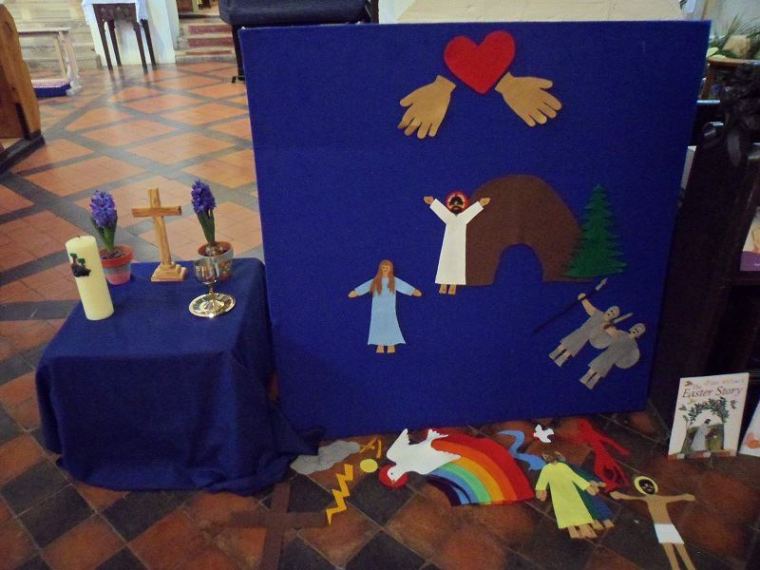 Unlike Godly Play, Beulah Land is large-scale enough to easily be used in All-Age Worship. You can use the scripts that come with it, or you can use the original Biblical text. 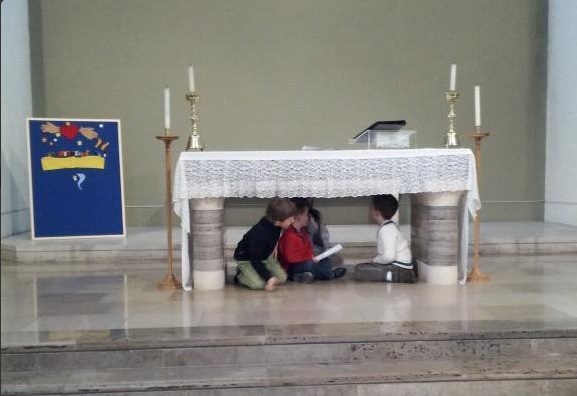 I told the story by moving the feltboard to lean on the front of the altar. After I was done, I moved it to the back, where it was still visible, but not in the way of the altar.  This feltboard shows a story from Harvest Festival, showing the people of Israel remembering how the Lord had saved them from slavery in Egypt, and offering him sacrifices of thanksgiving in return. The Beulah Land stories don’t cover that particular reading, but the pieces are so flexible that with a little imagination, they can be used for stories that aren’t in the manuals. (Our Diocesan Office has the first two Beulah Land sets, and these can be borrowed – email youthoffice@stalbans.anglican.org for more information)

Beulah Land also has a script for the Apostle’s Creed, so you can use it for that as well as for storytelling.

LEARN FROM MY FAILURE: If you’re reading the script AND telling the story, make sure you have a good microphone and that you’re confident enough in the words to be mostly off-book. If someone else is reading, make sure you practice with them ahead of time so they know if there’s a place where they need to PAUSE to let you finish putting up some pieces!

I’ve done this once, and it was actually an unqualified success, so I don’t have a “learn from my failure” lesson here – and the reason it was a success is because I’d done it before, at a conference, so I’d had a chance to practice. So that would be my tip.

The story was the commissioning of the 70 Disciples – they’re sent out in pairs, told to bring nothing with them, and return to Jesus astonished at the power they’ve discovered in themselves, from him.

I’d been at a conference (see below) where the commissioning of the 12 was told in this way, so it was easy to adapt. 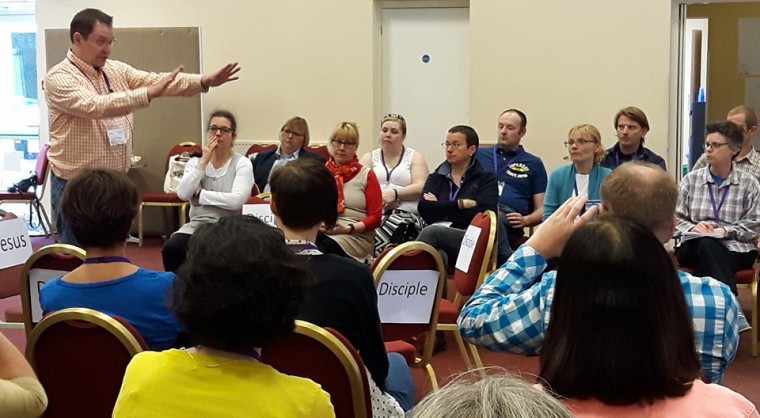 I took 5 chairs, labelled 1 “Jesus” and the others “Disciple,” and brought them onto the chancel at the start of the reading.

I read the Biblical text in sections, and moved the chairs around – when the disciples were sent out, I moved them away from Jesus, and wondered aloud how they might move and where they might go. “Maybe some of them stayed close to Jesus. Maybe some rushed straight out. Maybe some turned around at the door to look back,” all the while moving the chairs.

In a congregation more inclined to get up and move around, I would have invited congregation members to join me in moving the chairs – “how do you think they might have moved?”

When the Disciples went out among the people, I moved them into the congregation, right up close to people. “I wonder what the people in the villages thought when these strange new people arrived? What did they think or feel when they started telling them about Jesus?” And then I’d go back and read the next section of the Biblical text.

The chairs idea is very flexible, as it can be used for any story in which individual characters (as opposed to “the people” collectively) are important to the narrative.  But there are a few other easy ways to use props:

If you’re doing the story of Creation, you can use props to build a world as you tell it (some pot plants, stuffed animals, blue fabric to be the water, lamps to be the lights, a pop-up tent as the firmament if you’re feeling ambitious …

If you’re doing the Christmas story, you can start with an empty crib and add the figures to it one by one, wondering as you do so what each of them thought and felt at crucial moments of the story.

Blue fabric can be water or sky, red fabric can be flames.  An electric fan can create wind. A party popper, hidden in your palm and popped with no warning at “HAIL, O FAVOURED ONE!” can create a genuinely surprised reaction to the appearance of Gabriel in the Annunciation story.  Hiding an object under a blanket can create tension and suspense for any story that involves waiting for something to be revealed (e.g. the giving of the Ten Commandments – you can paint cardboard ones and hide them – Christmas, many of the Parables of the Lost.)

Items placed in the pews and brought up during the story can be useful – if you’re doing Noah’s Ark or the Peaceable Kingdom, you can place stuffed animals in the pews and have them brought up and create a safe place for them all and for any children who want to join them.  If you’re doing Harvest Festival and are dealing with some bit of Deuteronomy about giving our duty to the Lord, you can have images of the work we do in school and in our offices/workplaces/homes set about the church and brought up to the altar.

You may notice I haven’t said a word about puppets or about videos – two other very popular forms of storytelling.  This is because I have no experience in these methods myself – I’m not a puppet person, and the church I served doesn’t have video screens (though I have used videos in Sunday School and Assemblies).  This series is focused on my own experiences, not general rules – I do mention puppets and videos in my wider All-Age Worship training.  Please feel free, if you have personal stories of using these or other methods, to mention them in the comments!

Next time: All-Age Worship maintaining themes and symbols THROUGH A SEASON – I know it’s August, but the best photos I have are of Lent, Holy Week, and Easter, so that’s what we’ll do. I’ll try to get some good photos of Advent and Christmas this year and share those for next year!