This is titled Pray and Play inspiration, as it shows a space for imaginative spiritual play – but since it was part of a Junior Church session, I’ve included response time/wondering ideas as well.

We’re finishing up the Hebrew Scriptures in my own Junior Church group – we started with Creation in September, and I timed the Babylonian exile to go with Lent, and the return home to happen around Easter (though of course they celebrated Palm Sunday, Holy Week, and Easter as part of the main congregation).

The rest of the year will be spent on psalms and prophesies. Last Sunday, we had a mixed session with our under-5s group, since our attendance plummets on Bank Holidays and we merge the groups. I picked Psalm 23 – for many of the reasons listed in my previous post about it. It’s accessible, it’s familiar to some children already, the imagery works with people of all ages, and it has simple language with deep truths. We ended up with a small group ranging in age from 7 to 15.

I set up this play space as one of the options for response time. I did tell the teenagers that if they wanted to regress to childhood and play with it, I wouldn’t tell their friends. It got a bit of use, but not much – I imagine with toddlers, it would have been much more popular. 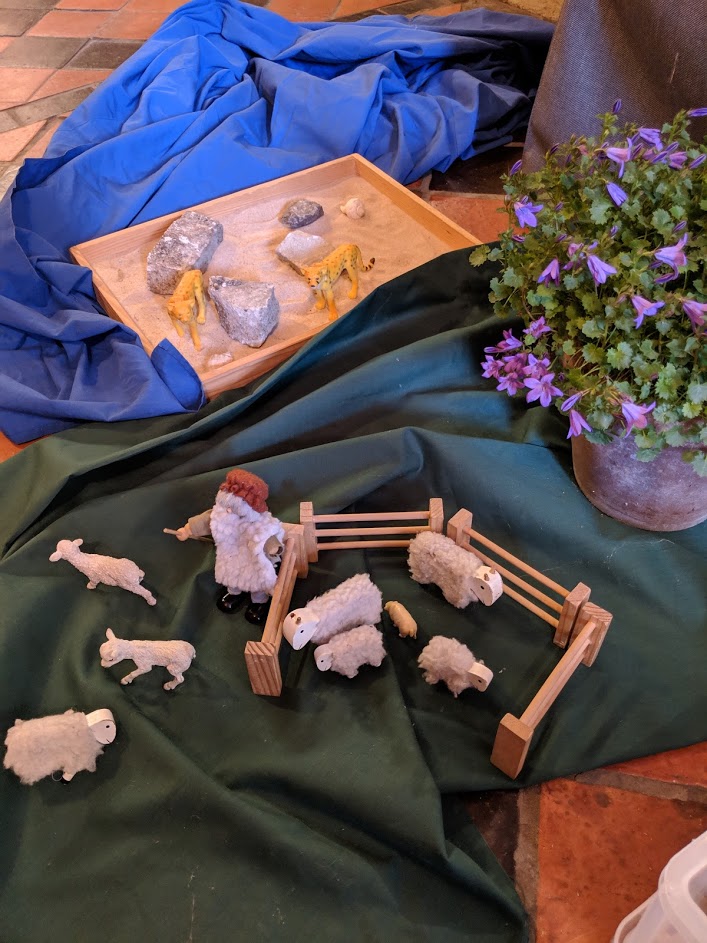 I based the three zones off the imagery in the psalm – “green pastures, still waters, the valley of the shadow of death.” These are picked up on in the Godly Play telling of the Good Shepherd parable.

This wonderful shepherd and sheep set can be purchased for around £12, from many places, including Amazon. I added fencing from a model railway set. Plain coloured cotton can be found at Hobbycraft and other places for around £2 to £5 per metre. 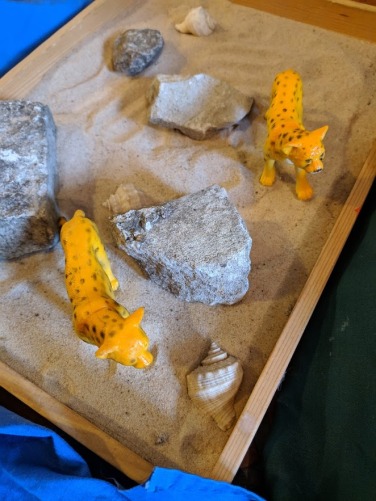 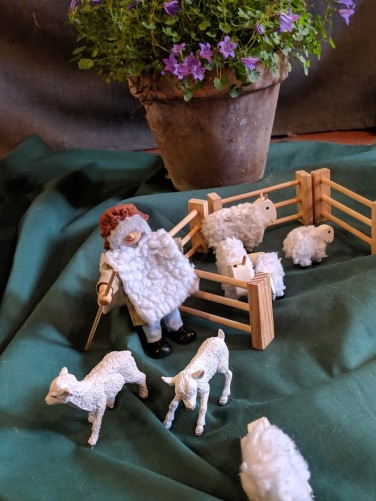 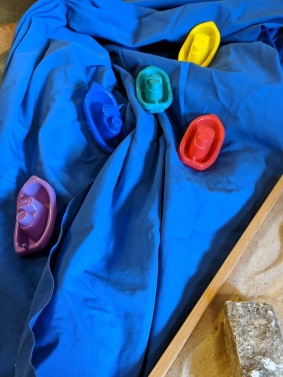 The sand tray is the packaging from a wooden Nativity set I bought a few years ago (note: the link takes you to Mustard Seed Kids, which I own – the set is available elsewhere as well). I just kept the tray it all came in, and filled it up with sand, and a few rocks from the church garden. There were no wolves in the plastic animals set the church owns, so I used cheetahs.

Later, I wanted to make it clearer that the blue fabric was water, so I added some boats. You could also add shells (I have some – you can see a few in the sand tray – I just didn’t think of it) and/or plastic sea creatures, if you have them.

The older kids sometimes have trouble figuring out what to do with response time, and phones come out. So I gave them a few prompts: 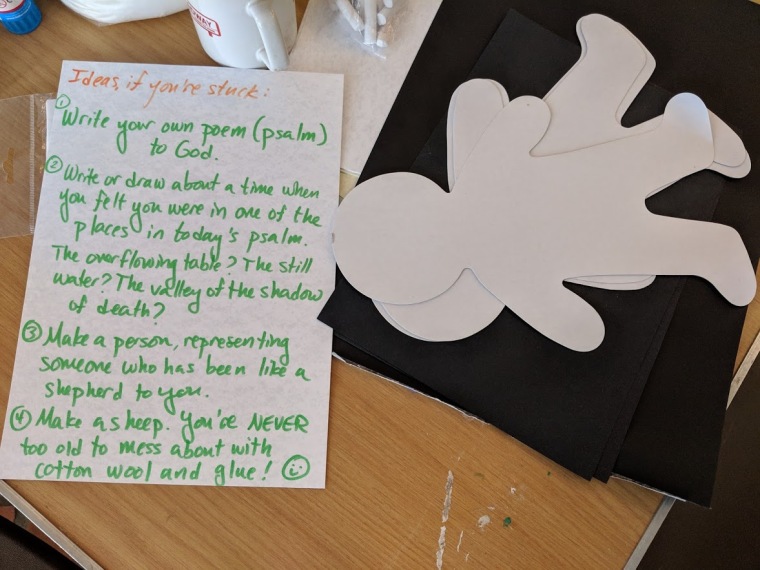 Some of the wondering questions I used:

I wonder what your favourite part of the psalm was.

I wonder what the most important part of the psalm was.

I wonder if you have ever been someplace that felt like the green pastures and the still waters.

I wonder if you have ever been someplace that felt like the valley of the shadow of death. (“EXAMS” was the immediate response. The follow-up here WOULD have been the Godly Play follow-up – “I wonder what got you through” – but we got sidetracked into a discussion about how some things can be symbols of both life AND death, and I forgot it!)

I wonder what it feels like to have a meal prepared for you in the presence of your enemies.